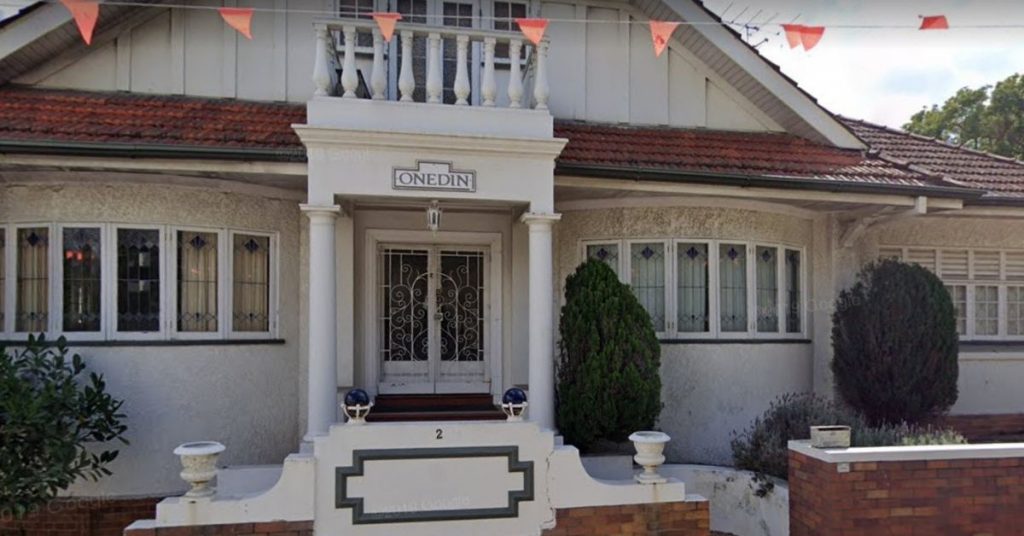 Onedin, a Spanish-style house on Grays Road with a dark and scandalous past, has been put up for auction. In the 1950s, this Hamilton house was the scene of a murder-scandal involving a socialite couple.

With unobstructed views of the Brisbane River and the Story Bridge, this stately and elevated house thrives as a multimillion-dollar property within a bluechip suburb despite its history. Realtors expect Onedin, the house’s name, to fetch a substantial price when it goes on the market on Saturday, 20 March 2021.

Onedin house has a master suite on the top floor with its own living room and balcony. The living space on the ground floor faces towards the city views, whilst the kitchen and three bedrooms with bathrooms are set at the back of the house, where there is privacy. This Hamilton house also has a lower level with a secure garage, laundry room and bathroom.

Sitting on a 607 square metre block with garden hedges, Onedin was once the site of socialite parties. It was owned by Sylvia Joyce Clare Ferguson and Roy Ferguson.

What happened inside Onedin?

According to reports, Roy co-owned pubs, breweries and hotels around Forbes and Newcastle, as well as a poultry farm in Charleston with his brother, Jack Ferguson. A wealthy bachelor, Roy met his wife in the 1940s whilst she was working as a barmaid. They moved from New South Wales to settle into this Hamilton house when they got married.

Sylvia, however, had a lover, Albert Eric Murphy, who worked for Roy and he discovered that the Fergusons were not legally married. Soon, Sylvia and Eric met in secret and she convinced him that Roy was a violent and dangerous man, who won’t hesitate to use a gun.

They continued the affair even as the Fergusons moved to Brisbane. Despite telling Eric that she was in an unhappy marriage with a man she feared, Sylvia agreed to finally legally wed Roy in 1953.

But Sylvia and Eric were still in contact and soon decided to plan Roy’s murder so they could run away together and she could have her husband’s fortune. They sought the help of Ernie Hamilton, a friend of Roy’s who knew Sylvia’s affair. Ernie agreed to the plan for 1,000 pounds.

On the night of the murder, Sylvia gave Eric and Ernie access to the Hamilton house, while Roy had been sleeping. Their home companions Thelma and Wally Gray woke up at 1:30 a.m. to Sylvia screaming for help as Roy had been hit.

However, Sylvia, who had never been discreet with her affair, admitted to the murder plan during the investigation. She told the police Ernie was blackmailing her but the judge would hand a guilty verdict for all three attackers.

Sylvia was sentenced to 10 years whilst Eric and Ernie were in prison for three years.

Meanwhile, Onedin went up the market more than 15 years ago before the current owners decided to sell. Place Ascot is conducting the auction at its headquarters on James Street at 10:00 a.m. on 20 March.