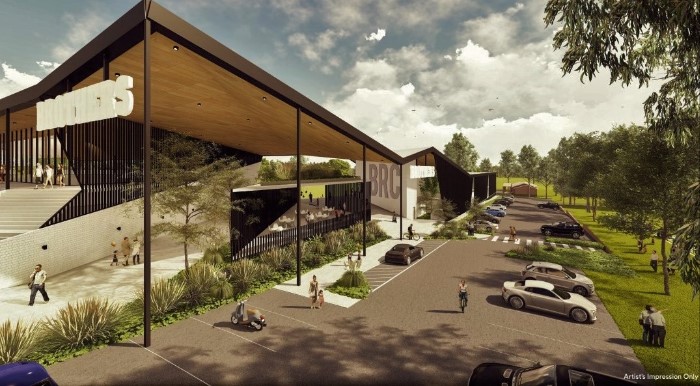 The Brothers Rugby Union Club has lodged a development application seeking approval for the refurbishment of Brothers Rugby Club and its sporting facilities at Crosby Park in Albion, over two stages.

The subject site, located at 103 Crosby Road, Albion, comprises five parcels of land with a total area of 55,141 sqm in relation to the masterplan area.

Designed by bureau^proberts, the proposed development will be carried out in a two-stage masterplan, with Stage 1 broken down into three sub-stages, and is expected to be completed over an 18-month period.

Stage 1A involves field and lighting works and tiered seating, which is not assessable under the Brisbane City Plan 2014 and so does not form part of the development application.

Stage 1B involves the construction of a new clubhouse and ancillary administration areas with GFA of 1,656sqm, which includes the office area and associated board and meeting room, reception and shop, and the Club room, as well as a kitchen and a canteen.

Change rooms and “player dressing sheds” are also proposed on the lower level of the refurbishment. These works will occur to the west of the Jack Ross Oval.

In the south western portion of the subject site, construction of a new 860sqm swim school and 160 car parking spaces, including 4 PWD, is also proposed.

Stage 1C includes the proposed 501sqm Health care services and the 603sqm Indoor sport and recreation facility in the form of two gyms, to be situated north of the main field.  Both facilities will be open for public use.

The proposal also includes the introduction of new commercial tenancies to the north of Jack Ross Oval which includes four tenancies across two levels, along with the existing ancillary bar and a new beer garden.

Stage 2 continues the remainder of the refurbishment works to the west of the main field, including a function facility on the upper level and change rooms on the lower level.

“The proposed refurbishment to Brothers Rugby Club and its facilities provides a much-needed upgrade to align the club with Queensland premier rugby competition standards. In doing so it allows for the continued use of the facility as a formalised sport and recreation use as well as an informal one for the wider community for passive and active recreation,” Urbis Town Planning report said.

“In general, the proposed investment will considerably improve the Clubhouse and facilities, and increase accessibility and participation for people of all ages and abilities, providing an equal experience for everyone. The upgrade will also embrace and enhance the wide open spaces the community loves and enjoys at Crosby Park,” Brothers Rugby Club said.